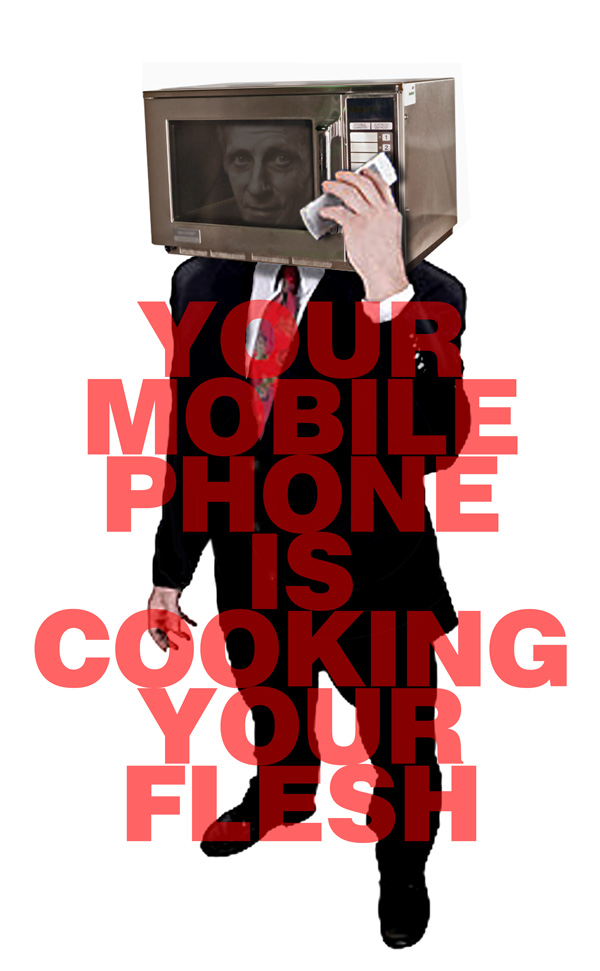 in about 1999, i got a mobile phone. i was working as technical manager for a touring theatre company at the time, and needed one to stay in touch with base when on the road. i was working pretty long days in pretty long weeks away from home and i got into the habit of keeping my phone in my left-hand trouser pocket. otherwise i’d lose it, or if i kept it in a bag i wouldn’t get to answer it in time.

so, this habit continued when i was off work, and i guess i had my phone resting against the same part of my leg for 16 hours a day, every day for around  6 or 7 years. it was then that i noticed my left thigh had started to go numb. sometimes – particularly at night – i would get pain, like that burning sensation when you pull a muscle – but on the whole, it was pretty much senseless. only the left leg. only the outside of the thigh.

it took a few months to realise that it might be the mobile microwave transmitter that had cooked my leg. cell phones are constantly sending little packets of information across the network in order to locate themselves. it happens more if you’re traveling – so as i spent most of my time driving a van from venue to venue, there were plenty of little packets of data beaming themselves into my leg throughout the day.

i mentioned this phenomenon to a guy i met who works in the mobile communications research dept of a major tech company. he said i was imagining things, and that mobile phones are safe. well he would, wouldn’t he?

my job has changed now, and i’m working more from home, where my phone sits on a shelf, a safe distance away. when i’m traveling, my phone stays in a bag or coat pocket. if i have to put it in my trouser pocket, it gets swapped around regularly. these days, my leg is much better. it still feels a bit weird, but i no longer experience the pains or excessive numbness.

i try not to use my phone too much for making calls. one evening last week i was talking to a friend for about 40 minutes, and by the time we had disconnected, my ear was bright red and hot to touch. the following morning i woke with a massive headache in that side of my head, which took 24 hours to get better.

i think its crazy that we carry these microwave transmitters with us, constantly sending little waves out, and then when we turn up the power and send a large number of these waves out, we press them against our heads, cooking our brains. modern phones are smarter – they do more stuff, more frequently – and they are also more powerful transmitters. everyone has them, teenagers and children use them almost constantly, yet no manufacturer of mobile technology is saying that they have considered the safety aspects when designing their devices. this would draw attention to the inherent dangers of using this technology in the long term.

i may be more sensitive to the effects of microwaves than most people, and i may have been stupid to keep my phone against the same part of my body for a number of years, but i’m convinced that these things are more dangerous than the retailers would ever admit.

keep safe, keep your phone away from your flesh.

how does your phone compare? Specific Absorption Rates for many makes and models

a comprehensive article from the Swiss Federal Office of Public Health